Where the Streets Have No Name (The Nightlife In Yogyakarta)

Okay, that's not exactly true about the streets of Yogyakarta. The streets and roads here are a traveller's pipe dream-take one turn and you'll find yourself in another area of town where there are five other possible alleys to get yourself lost in. Bono's words echo steadily in my head like a mantra whenever I think of Yogyakarta's many intricate streets because its difficult not to be drawn and taken in by its mysteries-they all look similar but with each turning, each sharp turn to the left or the right unfolds many new secrets and surprises.

One cannot claim to be a full-fledged traveler if one has not unraveled the various locales of a place, trying out different foods whilst exploring and understanding varying cultures and ideologies. And that was precisely what Rashaad and I set ourselves out here to do in Yogyakarta, starting from the humble comforts of our hotel-behind-another-big hotel, Hotel Puspo Nugroho. Within two days of living in the city and after a guilty meal of Mcdonald's which was situated next to a river community, we both decided: We wanted to see the real Yogyakarta, living and breathing in all its glory with the pengamens (Street musicians) and street vendors. Flush out all the McDonalds, sterilize the KFCs, and get to the soul of the city.
The socialist in me was screaming silently to be let out. 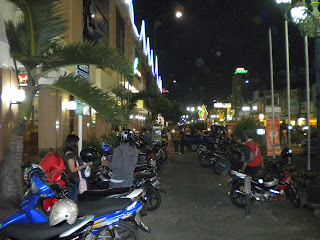 The (over) commercialized Malioboro street
The streets tonight had so much to offer-it was teeming with activity, buzzing alive with the bright lights guiding the way all across Malioboro street, But that was not where I was headed tonight in search for my story. No, we had seen and heard plenty of what Malioboro street had to offer us, with its delectable nasi uduk (coconut rice) to the interesting eating arrangements of the lesehan. No, I had decided that tonight would be another adventure, fresh in perspective and uncertain in its outcome. After a satisfying meal of nasi goreng istimewa, Rashaad and I left the comforts of the city lights and ventured into the welcoming darkness of Jalan Pasar Kembang.

The nightlife. Where your every need and desire would be taken care of. With a price, of course.

The thirst for adventure beckoned to us like a hungry tiger playing games with its prey. We took the bait- hook, line and sinker walking steadily into the unknown. We had no idea what to expect of the 'red light district' that is Pasar Kembang. We heard stories of it being the central place for illegal transactions and the ever-elusive trading of the flesh. The first thing that caught my eye as we walked down the street was that it was much more quieter than its neighboring roads. Silence seemed to be the noisiest sound around, screaming at us, hovering around us as we continued our walk. Buildings seemed bigger and yet colder than the familiar petite ones of Malioboro. The first shop that we went into was a Rasta shop, specializing in Jamaican Bob Marley-ish clothing and paraphernalia. The owner of the shop was dressed in the traditional Jamaican way; thick corn-rows with a green and yellow t-shirt. We asked him a couple of questions about the shop and about Reggae culture, but after a few short and curt answers, we realized that he wasn't too comfortable with us asking too many questions.

As we left the shop, Rashaad had spotted an alley that looked 'dodgy' enough to contain activities of the night worth writing about. The little alley was dimly lit at first, but eventually led to another path whichhad two forked little roads at the end. Left or Right? What road should we take tonight? 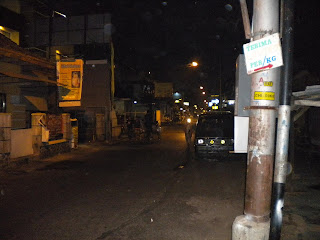 The 'dodgy' alley... what can we find here?
Left. Funny how things work, because left gave us the right stuff to talk about. The next road was bursting with activity, there was a comfy-looking backpackers hotel where foreign tourists were enjoying dinner. The place had WIRELESS internet. Along with wine, western food and fine dining. I don't know what confused me more, the fact that there were so many people living in what was considered to be the most dangerous part of town; or the fact that the hotels here were full of tourists and were quite well-maintained. Apparently, European and American tourists prefer the Pasar Kembang area as opposed to Malioboro Central. 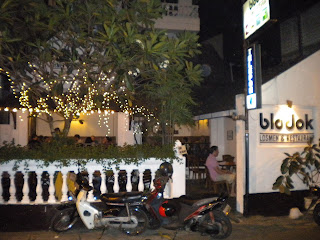 Pasar Kembang area- the new 'it' place for foreign travelers?
I also noticed that the Malioboro area tend to be more Islamic in nature, with the azan (Muslim call for prayer) emanating from all corners, whilst Pasar Kembang was considerably more westernized, with pubs, restaurants and foreigners flocking the place.

I wish I could say that after that we found what we were looking for, that is we witnessed illegal transactions and girls/guys offering us 'services.' We didn't. Nothing happened. The night called out to us and we dived right into the stereotypes of perceptions of a city, that it had its dirty secrets and sins lying around at every corner.

I'm sure that Pasar Kembang had more to offer than a dazed-looking Rastafarian owner, and swanky western hotels. The night was surely as dangerous as we thought it would be.
We just didn't find it


WRITER'S PROFILE: Shazwan is a Malaysian student at Monash University Malaysia originally from Penang.He has hopefully made it through his final semester with a Bachelor of Arts, majoring in Communications and minoring in Writing. He tries to study social sciences when he can, but in truth he thinks life is a big lesson itself. Usually mistaken for an Arab, Indian or Chindian, Shazwan has grown comfortable with the androgyny of his identity.
Posted by Monash