I have contemplated a multitude of angles in which to start this essay on shopping. I thought of so many ways in which I could begin a sentence which would properly describe the essence of shopping in Yogyakarta. Alas, I have no avenue. The tale must be told as it is. Shopping in Yogya is simply spectacular. Take from me, this is something you DO NOT want to miss. I believe the higher powers above were indeed working for our greater good when we got a hotel right on the edge of Malioboro Street, the Yogyan street best known for it's shopping. Row after row you see a tempting delight, be it a batik wallet or leather jewelery. Minute after minute you are enticed by dirt cheap bargains.

I believe the best thing that ever happened to me in Indonesia was the fact that I became a millionaireness as soon as I set foot here. The power I felt in my hands (and wallet) was too good a feeling. What was even greater was the prices at which things are sold here. A Coke costs about Rupiah 2000-3000 (approx. RM1) while back home it costs at least Rm1.70. Apart from Coke, just everything else from t-shirts to souvenirs to groceries is unbelievably cheap. What makes the shopping all the more holy is the variety and quality of things you can get.

Take batik for instance. I've come up with a slogan for the batik here- “even before you think about it in batik, it's been made in batik”. I come from a country where batik prints are restricted largely to clothes and the occasional key chain here and there. But this was a real shocker- from wallets to fans to bangles to chopsticks, people here live and breathe in batik! We headed on our final day to a place called Mirota Batik, a shopping haven where you can get everything, and then some. I have never seen SO many things in batik. There were batik plates, drawings, batik on necklaces, mirrors, trays, scarves, bedsheets, table runners, caps, slippers, rings, napkins, table mats, shampoo bottles, t-shirts, just everywhere! 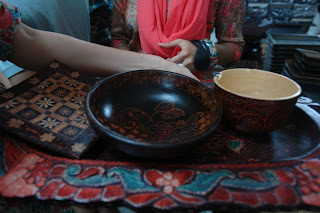 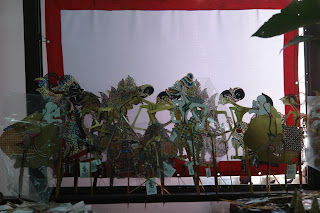 Wayang is one of the most popular souvenirs for foreign travelers to bring home
Malioboro will be further evidence for this; it seems as though God rained batik in place of water over the people of Yogya. Silver and cow skin are two other mediums that the locals love to utilize. You get lovely fans, foldable table lamps and other little memorabilia made from cow skin while designs in silver echo the Javanese culture that is so typically Yogya. Motifs that I noticed include the Javanese leaf, bullock cart, 'andung' (horse carriage), Rama and Sita, and various types of flowers made into brooches. There is yet another market on Malioboro Street, dedicated solely to clothes, called Beringharjo. This is the place to go when you need to buy clothes and trust me, your head will be spinning after you're done with it. Perched stall after perched stall you will find batik shirts, batik sarongs, dresses, jumpsuits, bags- the list just goes on. 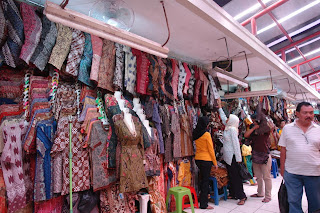 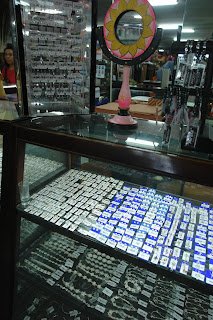 Silver stall at Beringharjo
What's the Everest amongst all of this is the knowledge that everything is bargainable. Malioboro is filled with bargains from start to finish, as is Beringharjo (though a word of caution- even the best fail to bargain here). And for someone like me, nicknamed the Bargain Queen, this place was like paradise. Bargains left and right attack you, threatening to tip your luggage allowance scale even further. Of course, the cardinal rule that the more you buy, the cheaper you get still applies. As such, I think it's safe to say that I bought everything that was buy-able. In fact, I even bargained at a place where it was unimaginable that bargains are possible- the money exchanger. While all this makes you want to thank capitalism for existing, shopping in Yogya has also been one of the most eye-opening experiences of my life. Dirt cheap was good for me, but what about those who make these things? Sellers still scrape by with profits, but the state of the producers just makes me wonder how they get by- and how much they get by on. One other thing that really wrenched my heart out was when we were in Beringharjo and an elderly lady approached me. At first I thought she wanted money, as it's not an uncommon sight to see the elderly begging. But she pointed to her back, and upon a closer listen, I understood that she was offering to carry my heavy bag of shopping. Brash as this may sound, my own personal slave. To follow me wherever I was going, carrying my shopping. Makes you think, doesn't it? 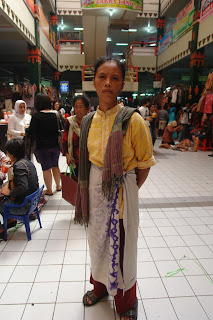 The lady that offered to carry our shopping
(for more information, click Gendhong Women of Beringharjo)
At the end of the day however, it is undeniable that Yogyakarta is one of the best destinations to shop for things- things that are not only good in quality, but are also culturally symbolic and the best part are the bargains. Needless to say, my most favourite word in Indonesian was “bisa kurang” (can lower more?).


WRITER'S PROFILE: Abeer is pursuing Writing and International Studies at Monash University Sunway Campus. Being especially talkactive and chatty, Abeer is also part of the blog team that is in charge of this blog and In Search of Yogyakarta's facebook.
Posted by Monash