There's never a clear line between mythology and reasoning when it comes to basic human understandings. When we question the unknown, there seem to be this indefinite need to include some form of logic that circulates what we were taught to believe is real. The Prambanan Hindu Temple is precisely one of those mysteries of undefined history.

It was said to be constructed during the Sanjaya Dynasty around the 9th Century to represent the role of Hinduism within the Java Province. However, one can't help but question the possibilities to its construction given the preconception of mankind's primitiveness during that era. Hence, a folklore was passed down through generations to describe a love-tale between Bandung Bondowoso and Roro Jonggrang that had contributed to the temple's existence. It was believed that Bondowoso had used the force of spirits to build 999 temples for the princess within 24 hours upon request. Jonggrang's attempt of refusing his love had left her in a curse to be the 1,000th temple, whereby it is now believed to be within the highest temple, Shiva (Nandi). 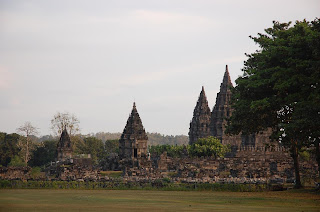 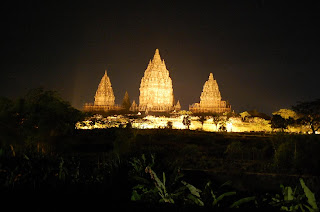 Candi Prambanan by night
Today, visitors will notice 6 main structures in the main yard consisting of the Brahma(Angsa), Shiva and Vishnu(Garuda) temples. Unfortunately, the present view of the temple has certainly changed from what it was 3 years ago due to the earthquake tragedy in 2006 that had shattered parts of the ancient temple.

The heavy chattering noises from the crowd was suddenly replaced by a sudden silence, with the echoes of the 'gamelan' (traditional Indonesian music) melody playing from a distance.It is absolutely heartbreaking as you enter the park, only to see stacked up stones everywhere that had been preserved from the destruction. Amidst the mixed feelings of amazement and disappointment, the Prambanan remained beautifully positioned in a serene ambient.

Only 2 of the temples were accessible, while the rest remain bounded behind barriers due to restoration processes. The visitors were not only intrigued by the monuments, but were also taking photographs of the working progress by the local workers. They were attending to the Vishnu Temple by carefully sliding the stones down through wood panels onto the rubber tires on the ground. Along the exit area comes another painful view of damaged but neatly piled up stones around, whereby it makes it hard to imagine how long it will take to reconstruct history.

While some people stood and sat in silence within the corners, staring away into the calmness of the space, others found a special interest in capturing the moment in different ways. It was interesting to note how most of the visitors became so engrossed in their photograph and video sessions. Perhaps it was the symmetrical beauty of the place that had resulted to desirable image shots. 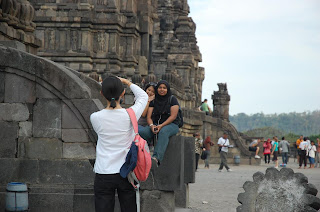 students engrossed in their own photo sessions
The Monash crew took the opportunity to film short videos with Shazwan as the voluntary superstar, expressing some form of reminiscence to the Garuda Temple. The other directions showed some of the tourists posing away for photo shots in funny imitations of the Hindu Gods. It was evident that the undeniable beauty of the area had magically enticed these people to record the unforgettable experience of being there.

The Prambanan's architecture show carvings which depicts the tale of the legendary Ramayana. Thus, most of the temple visitors tend to take interest in the Ramayana Ballet performance, which is held in the Prambanan Temple Tourist Complex that overlooks the back view of the Prambanan. The spacious stage is designed with a mimic of the Hindu architecture as well as the Shiva temple as an almost perfect backdrop. The Ramayana tale has been a popular story-telling favourite that has been passed down from generations. The story revolves around the love between Dewi Shinta and Rama Wijaya that was conflicted with the evil forces of Rahwana who wanted to break the relationship. Rahwana's evil intentions brought upon a range of other misfortunes between various characthers like Jatayu, Hanoman and Subali. These chronological events are presented on stage by the performers through a collaboration of drama (role characterizations), dance (delicate and refined body movements) and music (gamelan) choreographies. 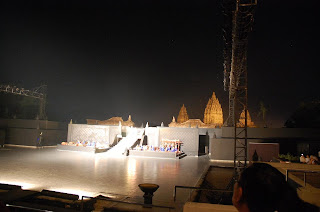 Ramayana Ballet stage with a view of the Prambanan temple
The Monash team was fortunate enough to gain a special access to the backstage which had allowed a preview to the preparation process by some of the performers. Entering the room filled with women who were busy putting on make-up was certainly intimidating for a non-formal interview session. Nevertheless, a few of them had managed to share their pride in being a part of the Ramayana performing crew. Apparently, most of the dancers are usually spotted for their talent from Sekolah Menengah Karawitan as well as the Institute Seni Indonesia (ISI) by the director. Some of them expressed that when they are on stage, they want to satisfy the audience by giving their best performance because it is a way of introducing their theatre culture to the people. This motivation perpetuates them to participate in workshops during the day, whereby they attempt to teach interested individuals the art of the Ramayana dance. What was interesting about these experienced performers was that they've reached a point where they don't necessarily need rehearsals. All they have to do is to come in and prepare themselves into their costumes before show time. 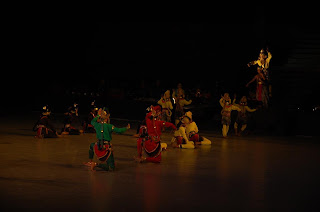 Performers in the first part of the ballet
It is no suprise that the Javanese culture takes honour in the beautiful Ramayana show. The grand performance has an unspoken effect on its audience, especially when the Prambanan Temple is visible from a distance. Though the show may be an elaborated and an expensive one, it is simply one of those investment that is worthwhile. The combination of the Prambanan sightseeing through the day and the Ramayana during the night provides a complete experience into the Javanese art and culture that mirrors the essence of Hinduism.

WRITER'S PROFILE: Rachel Lai is a Malaysian currently pursuing her FINAL year in Bachelor of Arts (majoring in International Studies and Communications) in Monash University Malaysia. A passionate day-dreamer addicted to exploration, she believes that there is nothing in this world that should stop us from fulfilling our dreams.
Posted by Monash