13 July 2009
Bus rides have an almost hypnotic quality. Pulling one self onto the vehicle, fighting the seats for extra space, hearing the groan of the engine and the ensuing bumpy ride all meld together into an insipid, mechanical yet endearing performance where attendance is compulsory. Most of us take the time to unpack our thoughts with fellow travelers, to stare wistfully at the passing landscape, whether residing in thoughts of magnanimity or releasing the mind to nothingness, or to catch up on sleep, lost somewhere in an internet cafe. I chose to get some shut-eye, but before I could drift off to a place anywhere close to sleep we had already arrived.
It was a sunny afternoon when we stepped off our bus into a small village settlement. A short walk further in revealed the meeting place of Taring Padi, an informal organisation bent on press freedom. Straight out of a Socialist textbook, the building was minimalist indesign and simplistic in nature. Home to Ucup and other drifters who come from all around the world, Taring Padi was established on the 21st of December 1998 and their main aim is social awareness as well as to give voice to the marginalised through art. 'Taring Padi' means "small but itchy", and this ideal is represented in their art work, bearing drawings of local politics much to the annoyance of the government. Their guerrilla art also takes the form of street sketches and musical performances, each loaded with a message of social change. 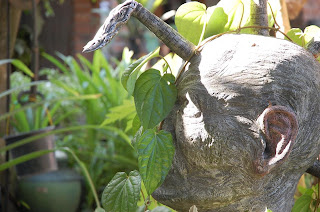 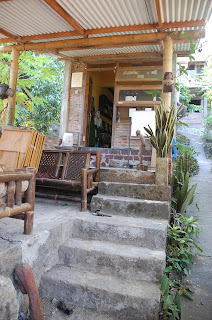 Taring Padi HQ from outside 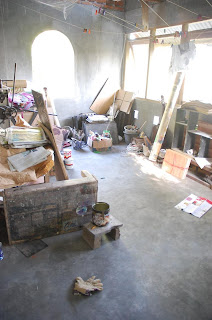 The organisation is largely informal and most of its members are fluid volunteers who come and go, the only formal meetings are those held on Mondays and Fridays which include brainstorming and ping-pong. They are painted as outcasts of society because of their unwillingness to conform to the status quo, and this allows the organisation to progress and develop through independence and autonomy. The only rule that exist within Taring Padi is the law of commitment and dedication; to live is to love with passion.

Ucup helped illustrate the creation process of their art, whereby the members come together to discuss ideas until a general consensus is reached, a sketch of the art and text is drawn and a final vetting process confirms the work. The modus operandi with their art revolves around free distribution for social progress, which includes stamping them along the streets and walls of Yogyakarta, and selling their work for profit to those who wish to collect and display their art, inclusive of private collectors and art galleries. They utilise their networks with farmers and labour unions as well as local and foreign NGO's to disseminate information. Ucup's personal philosophy of "semangat baik" or in his words, "good spirit", propels him to work in areas such as the local red light districts where he aims to help prostitutes to find alternative means of income. He does not play the saviour or discriminate against this section of society, he merely wishes to help alleviate their poverty-stricken situation by empowering them with knowledge and skills. 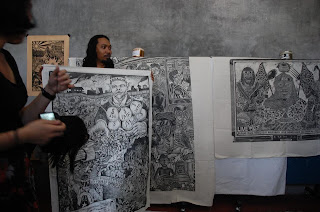 Ucup with several of his artworks

Initially consisting of discarded activists from the downfall of Suharto in 1998, Taring Padi has expanded to include various artists and students as well as spreading out to other places such as Jakarta, Australia, America, and even Malaysia. All their artwork is relative to the social context, such as the recent 2009 election poster series. Taring Padi is also active in demonstrations and rallies, exemplified by their physical opposition to the Bill of Pornography. 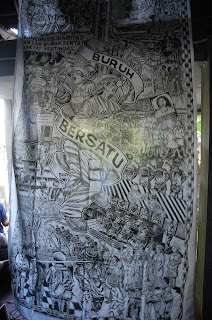 The peaceful serenity of the surrounding lends to an inspiring Romantic environment for envisioning and creating, a place that was built in the village by Ucup and his friends. Walking amidst the greenery it becomes evident how art is only as beautiful as the context of its creation, despite the contrast between the minimalist architecture versus the potency of their work. "The struggle must be consistent, even if it is slow it has to be maintained", says Ucup, as the work for him never ends. Whether it is myopic hippie wisdom or the patient recollections of a weathered activist, there will always be avoid to be filled with the passion of benevolence. Taring Padi takes a seat in that void, comfortable in their little enclave away from the city yet fervent at the forefront of society.


WRITER'S PROFILE: Rashaad is from Malaysia and loves exploring strange places at odd hours, looking for different, eccentric things to do. According to Rashaad, roaming around Yogyakarta at night helps to bring out the inner socialist while the isolation leaves room to think.
Posted by Monash