In the heart of bustling Yogyakarta lies the unique Muhammadiyah Muslim community- Kampung Kauman. With only a small, blue archway to give away its whereabouts, few locals, let alone tourists, visit this place. Once inside the walls of the serene and welcoming neighborhood, it’s hard to believe the traffic, buskers and markets are only meters away.

On day three of our study trip, Dr Yeoh really stepped up the search for Yogyakarta, leading us through a maze of narrow streets towards the home of renowned Batik artist, Lukman Jamali, a long-time resident of Kampung Kauman. 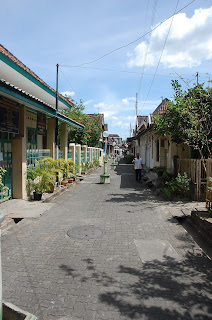 The streets of Kauman
The pace of a rushed journey dodging trishaws and trying to keep up with our ever -adventurous pathfinder, suddenly slowed as we made our way through the traffic-free alleyways, muttering “permisi ibu” (excuse me, miss) to women outside their homes, at the advice of our student guides. Passing the hushed houses, one gets a sense that much prayer has taken place behind these walls. Further down, towards the school, through the colourful delicate windows students can be glimpsed praying. Meanwhile, residents slowly wheel their motorbikes home, adhering to an unwritten rule to maintain the peace and quiet. Even the pet budgies seem to refrain from making a racket. 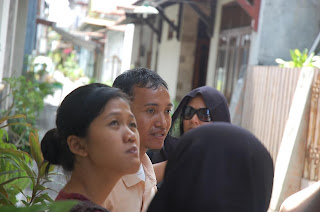 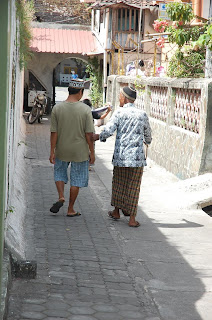 The calm of Kauman is no accident. The founder, K.H. Ahmad Dahlan intended to shield the community from outside noise and distractions. He set out to establish an atmosphere of study and learning in his quest for a reformed, modernized Islam that embraced the philosophies of Al Quran. After founding the village in 1912, Dahlan set up charity schools, libraries and hospitals which are still having a positive impact today. The boarding school, Kweek, which is known for its broad curriculum, draws girls from all around Indonesia, while the local library still carries out a tradition of knowledge-sharing by insisting that every hired book must be passed around to a network of seven people. The town was also the base for Dahlan’s batik design work, which he managed to turn into a successful trade.

Today’s residents are no less entrepreneurial, creative, and educated than their forefather.
Ariebowo Jamali, the son of Lukman Jamali who took up Dahlan’s mantle in the Batik business, is currently studying English literature at a local university. He kindly welcomed the study group into his family’s home this morning to tell us about the work of his father and mother, who are both masters of their craft. Sitting on the floor of his father’s studio, Ariebowo told us about Lukman’s batik paintings, which, he said were very popular in Europe, as well as locally. Examples of Lukman’s trademark, surreal faces hung on the walls of the studio, creating an artistic vibe in a space which doubles as the family room.

Only doors from the studio, Ariebowo’s mother, like many women in Kauman, works every evening at her own craft, which are no less popular around Yogya. Every morning the sound of people selling comforting, breakfast treats, or Kue Pukis, can be heard like a chant for the morning appetite. “Kue, Kue, Kue.. dua ribu dua ribu…”. At Ariebowo’s house, we had the chance to try some of Yogyakarta’s best Kue. Kue Pukis from the Kauman is known for being especially tasty, and the treats definitely lived up to their reputations. The assortment of soft, sweet bakery treats, from veggie doughnuts to butter cake, are made every day, in the wee hours of morning. For this reason, Ariebowo couldn’t introduce us to his mother, who was sleeping. 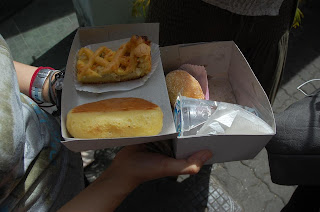 Kue, or the local delicacies made by Ariebowo's mother
Ariebowo plans to leave Kauman for further studies, but he plans to return to Kampung Kauman later to bring something back to the community as a member of the next generation and live out his twilight years in Kampung Kauman.


WRITER'S PROFILE: The 24 year old Jane is an exchange student from Monash University Caufield Campus, majoring in Journalism. Originally from Canberra, Jane is one adventurous traveler- before this trip she had went on a homestay program in Sabah (East Malaysia) and on a trip to Cambodia. Being especially good with the video-camera, Jane is heading the video team.
Posted by Monash