Beringharjo, a market which I visited today is located in the heart of Yogyakarta on Malioboro street. The market three floors, each floor selling different goods.The first and second floor are filled up with accessories, jajanan (snacks), food staples like rice, spices, vegetables, and also clothes. The topmost floor is used as a kind of storage area, which sells products in bulk for the smaller stores. All this may make Beringharjo sound like a regular market, but there is something unique about Beringharjo-the gendhong women. 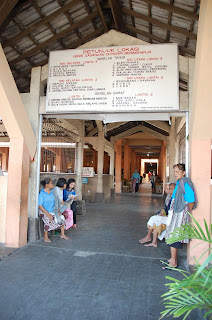 Customers can ask one out of the many Gendhong women to carry their shopping
On the third floor, I finally found a group of gendhong women, the group which I have been curious about ever since I was selected to write about them.Gendhong is a Javanese word meaning to carry something on the back.Based on my observation, one can only see this kind of women in Yogyakarta. The group of these women were chatting with each other on the bridge that links the North and South side of the market. Most of them are old women. Mbak Yatni, 34 years old, has already been working 22 years as a gendhong woman. With a typical Javanese face, brown skin and friendly smile, she shared some information about herself-like anyone else, she was willing to face hardship to make a living. In her mother's footstep, Mbak Yatni whose education ended in the elementary level decided to work as a gendhong woman to support her three children. Everyday, Mbak Yatni carries a variety of items on her back, such as food staples like rice or noodles. Each gendhong carrier has the capacity for 50lbs, and for each carrier load Mbak Yatni usually earns 1000 rupiah, or 10 American cents. Per day, she usually earns a total of 25,000-30,000 rupiah (around 2-3 dollars). It's hard work, especially since women are not physically built to carry heavy loads. 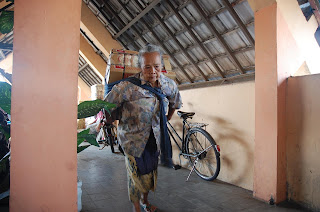 Gendhong women of Beringharjo
When asked about her secret to being able to carry such heavy loads, Mbak Yatni confides that she drinks jamu everyday, like the other older gendhong women. Jamu or herbs is a traditional medicine from Indonesia. For Indonesians, jamu is well known as an energy booster. Jamu is also believed to be beneficial to ones health and beauty. However, the jamu tradition is not popular among the younger generation of women. 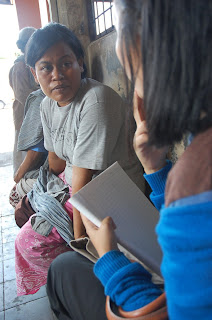 Mbak Yatni telling her tale
In another part of the market, there are three young energetic ladies who were carrying many packets of snacks on their back. I followed them to their destination, the Candi store where they work. With permission from their supervisors in the store, I was able to observe how these ladies work and to interview them. Hesti, 25 years old is the oldest among the three and she started working at the store six years ago. She is divorced with a child, and stopped her education in junior high school due to financial difficulties. Hesti introduced me to the youngest woman of the group, 17 year old Linda. All three earns approximately 400,000 rupiahs per month (around 40 USD). Asked about their hopes for the future, Hesti said she wanted to start up her own business while Linda hopes to continue her education when she has the necessary funds. Unlike the older generation of Gendhong women like Mbak Yatni, these young women do not credit their strength to jamu. Instead, they believe that they are naturally strong. Linda added that she has her strength from having sufficient sleep and eating regularly.

These women's stories also indirectly reveal the fluidity of the construction of the ideal masculinity. As opposed to the general consensus that a man should support a woman financially, the men in these women's lives have no problem with them contributing financially. Mbak Yatni's husband is a becak driver (trishaw driver) and it could be possible that there is no resistance on his part in allowing Mbak Yatni to work because it is financially necessary for her to work. Financial neccessity could be the main contributor in modifying the notion of masculinity among these people.

Observing their day, it seems to me life is unfair. These women have tough lives, with no opportunity to education, thus being unable to earn a higher income. Yet to my amazement, these Gendhong women do not complain, instead they are often seen smiling and helping each other good naturedly.

WRITER'S PROFILE: Neneng Retna Kurnia is a final year student in Monash University Sunway Campus. She is pursuing Bachelor of Arts majoring in Communication and International Studies. She is an Indonesian who is mixed with two ethnics of Indonesia, Bugis and Sunda. From several group of NGOs to gendhong women, she thinks that they all teach different knowledge on how to stand tall in this harmful world.