Local Music: The Pulse of the City

If Mount Merapi, Kraton, Borobudur and Prambanan were the heart and soul of Yogyakarta then music would be its pulse.

During my first night in Yogyakarta, one of the many sounds I heard were the sounds of guitar strumming, drum beats, tambourine's ringing and melodious harmonies streaming together as one, creating a sound of harmony juxtaposed within the sound of the city's busy streets of motorcyclists zooming down the street to the sounds of vehicles honking at the slightest traffic hold-up and becak (trishaw) drivers offering their services towards just about anywhere. 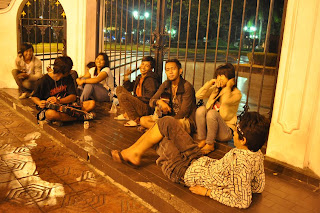 Students sitting on the streets of Yogyakarta strumming their guitars
To the uninitiated, it would have been a symphony of the most cacophonous. The sights and sounds of this vibrant city might not be seen anywhere else but here, especially along Malioboro Street, a busy street filled with vendors selling their wares ranging from batik clothing and flip-flops to T-shirts that say “I Heart Yogya” to stalls selling funky and colourful accessories to food stalls displaying their array of mouth watering local delicacies. All in all, it is a street filled with pretty souvenirs to bring back home to remind yourself of the wonderful times you had in Yogyakarta and great local street food that will definitely stimulate your taste buds.

However, one of the most striking sights in the streets is that of the pengamen or buskers. They are a dime a dozen here and yet they are respected by the people. They may be busking for the money but many of them are seen to be doing it for the passion and art of music itself. Along the streets of Malioboro, you can find youths hanging out with their friends, singing and strumming their guitar. It seems to be the favourite past time for these youths.

a pengamen playing music for the crowd
My first encounter with the ngamen was when I was walking past the lesehans, a place similar to the mamaks Malaysia but the difference is that customers of the stalls at lesehans sit on mats on the ground. The ngamen would perform at the sides and the group consist of one, two or more performers. The guitar is one of the most popular instruments used by the ngamen to make ends meets. However, there are those who are more elaborate where they have a band consisting of a vocalist, a guitarist, a drummer and a bassist,the whole make-up of a band. I was mesmerized by the amount of ngamen who could be found along the streets. They are well-accepted by the people with many obliging passers-by giving them a token sum for their performance.

I would think that the only venue to be serenade with great music would be whilst dining in a fancy restaurant but little did I know that such an event is also possible while I am sitting down at the lesehan digging in to the local nasi goreng (fried rice).

Rashaad and Shazwan, my fellow travelers and musicians mentioned that the ngamen here are a fresh change from Malaysia and claim that it is a pleasant experience to be able to see the pengamen being able to do what they do without being harassed by the authority. They also commented that the ngamen give the streets of Malioboro more life and makes it a much more cultural experience as it conveys the image that Yogyakarta is not only popular in the arts but also musically inclined, not inhibiting the abundance of talents. Intrigued by the chance at gaining the experience of being a pengamen, Shazwan and Rashaad tried their hand at busking at the Parangtritis Beach, a beach we visited and proved successful at scoring approximately Rp.15 000 from the passers-by. 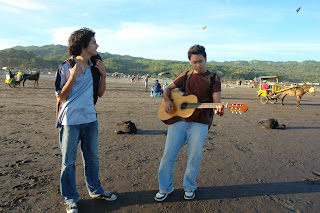 Rashaad and Shazwan trying their luck as pengamens
I managed to speak to Sapti, a 30-year-old ngamen who performs along the streets of Malioboro. She has been playing her flute for 3 years. She plays every night along Malioboro Street starting at 6.30pm till 10pm or beginning at 8.30pm if she plays in front of the Malioboro Mall. Playing in front of Malioboro Mall sometimes comes with risks as security from the mall restricts this activity. If that happens, she will walk around until the security are out of sight before she resumes her music. Sapti mostly plays Javanese music and Indonesian pop songs. She plays-by-ear where she listens to the song on the radio and then learns the chords from there. Such is the dedication to one's art. Being visually impaired does not stop Sapti from performing and doing what she loves to do even though she does it mainly to make ends meets.

Yogyakarta is truly a place where the city is alive with the sound of music.


WRITER'S PROFILE: Natasha is in her final year pursuing a degree in the Bachelor of Arts majoring in Communications and Writing. She is from Subang Jaya and in this trip, she will be seen lugging the unversity's camera being a part of the photography team, as we embark on a journey in search of Yogyakarta.
Posted by Monash