After a nice walkabout the last two days, I was dreading the fact that we were going to ride on a bus for hours. Little did I know that the journey would be short, what we were about to see and experience was totally worth the ride and the energy.

Our journey started at about 9am as we made our way to our first destination, the Kraton,or the Sultan's Palace. The palace is just around the corner from our hotel. Passing by Alun- Alun Selatan, a part of the Kraton compound made me realize how the area looked so different during the day as compared to the previous time we saw it during the night. The area was generally quiet and not bustling with activity compared to the crowds and peddlars crowding the area during the nights.

As we entered the Kraton's main gate we were greeted by two Gupalas, two statues made from stone, the guardians of the palace. There are two Gupalas, both on the left and right side of the gate because the Javanese people believe that for there are always two sides to a story, the bad and the good. Hence, upon approaching the main gate, one can see the Gupala symbolizing goodness on the left and that which symbolizes evil is on the left . The Kraton has seven main areas,catered for different purposes, ranging from meeting places to warehouse . In the main complex of the Kraton, known as the Kedhaton there are quite a few major places including Gedung Kuning (The Yellow House), the place where the current Sultan Hamengku Buwono X resides and Proboyakso, the place with a wooden wall used as a warehouse to keep royal heirlooms and sacred weapons. Next, still within Kedhaton, we visited Bangsal Manis literally meaning 'Sweet Pavilion'. This is where the royal family serve their meals during a party or a function. 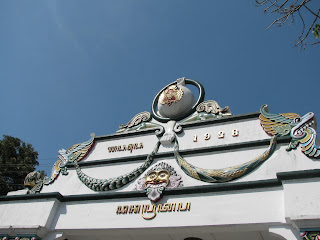 We continued our exploration inside the Kraton with a visit to the museum dedicated to Sultan Hamengku Buwono IX. The museum houses a lot of his personal belongings, awards, and pictures to be used as a constant reminder of the Sultan's contribution to the people of Indonesia.

One thing about the Kraton that really grabbed my attention was the fact that all motifs and figures have some philosophical meaning attached to them. Where they may look simple physically, each one of them is significant. Even the name of the Sultan himself has significant connotations. The name 'Hamengku Buwono' comes from Javanese language where 'hamengku' means on the lap and 'buwono' means the world. Altogether, Sultan Hamengku Buwono suggests that the world is metaphorically on the Sultan's lap.

Our short visit to the Keraton ended with the mystical sounds of the Gamelan ensemble entertaining the palace's visitor in the pavilion on our way out.

It was around 11am when we were supposed to continue our journey to another area of the Keraton, known as the Taman Sari (Water Castle) but due to the fact that many of us were hungry, we decided to give this place a miss and head for lunch near the biggest shopping mall here in Yogyakarta, Ambarukmo Plaza.

After we had a nice lunch, we walked over to the mall for a quick exploration before embarking upon our next destination, the Prambanan Temple area for a tour of the area and also to watch the most-anticipated Ramayana Ballet performance. In the mall, some of us sat down and enjoyed the delights of Starbucks or Dunkin Donuts while the others roamed the mall and did a little shopping for snacks and other things.

We reached the Prambanan Temple compound by 3pm greeted by a nice weather. Although there were significantly less visitors to this temple as compared to Borobudur, it does not mean that Prambanan is any less magnificent in its architecture, history and breath-taking view. In fact, most of us were happy moving around in the spacious area with members of the video team and the alumni shooting short clips utilizing the vast amount of space.

We did not hire a guide during this visit and explored the place individually reading the notes available in front of the various structures. The video and photography crew has a great time taking in the beautiful view and posing for different jumping shots at the vast amount of space available. 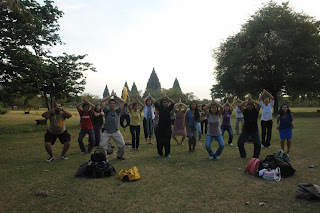 Our favorite jumping shot with Prambanan as the background
While waiting for the Ramayana Ballet to begin, we settled for dinner at the beautiful Prambanan Restaurant. Admittedly, I entered the restaurant with indifference about the location of our dinner venue but I was in complete awe, staring at the most breath-taking view ever, as we stared out at the Prambanan Temple filling the landscape of the foreground. The romantic scenery prompted one of the travelers to consider it as a potential venue for her future wedding ceremony. After the sun set, we found ourselves sitting under an open starry sky, enjoying dinner, sipping ginger tea, and found it hard to avert our gaze from the majestic view of the Prambanan Temple. 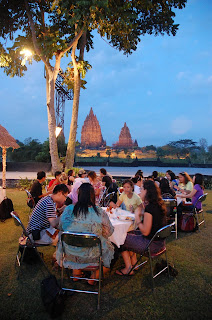 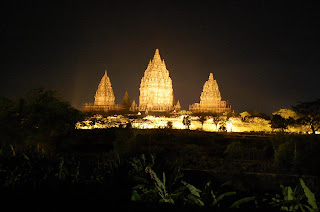 The majestic view of Prambanan at night
Soon after, it was time to head to the open-air theater for the Ramayana Ballet. We equipped ourselves with a bit of background information provided by the synopsis of the Ramayana epic provided at the entrance. Two of our lucky travelers, Rachel, who was doing a write-up exclusively for our visit to the Prambanan Temple and Jinn Wei, a member of the video team had an opportunity to interview some of the performers of the ballet before the show commenced. We were greeted with soothing music at the ballet's beginning and as the story unraveled, everyone was in awe of the splash of colors and costumes. The gentle dance movements continued to capture the audience's attention as they told the story of the great Ramayana epic in sequence. 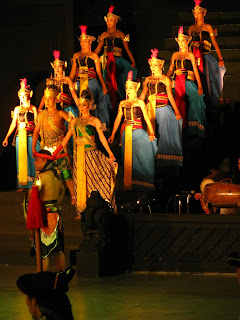 Performers at the Ramayana Ballet
It was the last night in Yogyakarta for our 2 alumni travellers, Aron and Eunice. They managed to present a short speech in the bus on the way home, telling us about the good time they had. We truly enjoyed their company and contribution and wished them a safe flight back to Kuala Lumpur .

It is now 3 am as I write the conclusion to this diary entry. Aching muscles and droopy eyelids prove to have been worthy for a fact, documenting the great day that we had today. I will always remember today's sightseeing trip as one of the very best.


WRITER'S PROFILE: Paulista is pursuing her final year in Bachelor of Arts. She transferred from Monash College, Jakarta last year and is among one of the Indonesian students in this trip. Although having been raised in Jakarta, Paulista has been exposed to the cultures of other regions of Indonesia, and admits that she would rather pick spicy or salty foods over sweet ones.
Posted by Monash