A glance of Taman Sari

Taman Sari water castle is one of the tourist destinations located in Kampung Taman, Kraton District, Yogyakarta. Sri Sultan Hamengku Buwono I, who was the first King of Yogyakarta, built it in 1758. This 10-hectare garden was also famously known as Perfume Garden or Fragrant Garden as there were many fragrant flowers grown in it. These flowers made this garden smell good and even more beautiful, but unfortunately those flowers do not exist anymore.

Several shots of multiple areas in Taman Sari
There are two main entrances at Taman Sari, that is Gapuro Agung (in the West part) and Gapuro Panggung (in the East).They are a combination of Hindu, Portuguese, Chinese, and Javanese architectures. Taman Sari used to function as a recreation place for the Sultan’s family, a place for meditation for the Sultan, and also a defense fort to avoid the enemies. After the death of Hamengku Buwono I, Sri Sultan Hamengku Buwono II who was the second King of Yogyakarta, used Taman Sari. Sultan Hamengku Bowono I and II are the only kings who used Taman Sari because in 1812 the Merapi Volcano erupted and destroyed it.

Officially, Taman Sari consists of three sections: the water castle, the underground mosque and Kenanga Island or Pulo Cemeti. Guides usually start the tour of Taman Sari from the entrance gate and continue to the water castle, then proceed to the underground mosque, and end the tour at Kenanga Island. There are three swimming pools (two for the concubines and one for Sultan), one dressing room and one private room in the water castle. The Sultan’s concubines usually gather at the swimming pool because one lucky concubine would be chosen by Sultan to accompany him swimming in his private swimming pool. The underground mosque is a place where Sultan used to pray and meditate. There is also a secret path as an escape route from the enemies. This mosque used to be surrounded by water and Sultan had to use a canoe to come to this place. The Kenanga Island or Pulo Cemeti is a fort to scout for enemies as it was the highest building in Yogyakarta at that time. This place got its name because at this place there were many kenanga flowers (Canangium Odoratum) which made this place especially fragrant. 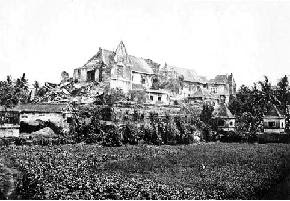 Kenanga Island (Pulo Cemeti) in 1881.
There are many tourists who come to Taman Sari, both local and international tourists. Based on the information given by the guides at Taman Sari; every day there are about 200 visitors coming to this place. Shortly after the earthquake which destroyed Taman Sari in 2006, the number of visitors began to decrease. However, after the renovation and restoration of Taman Sari, the number of tourists visiting Taman Sari has begun to increase.

Taman Sari is under the authority of Kraton. It means that some of the income from Taman Sari is channeled to the Kraton. This also one of the reasons why a visit to Taman Sari is included in the Kraton tour package. Travel agents usually arrange their schedule to visit Taman Sari after visiting Kraton.

Taman Sari opens daily from 9 a.m to 3 p.m. with its entrance fee 2,500 IDR for local tourists, 7,000 IDR for international tourist and 1.000 IDR for a camera fee. A licensed-guide will be available to accompany the tourists (optional).

So for those who are interested in cultural heritage especially in Jogjakarta, Taman Sari will be a good place to visit.
Posted by Monash