Our visit to Kraton, like any other tourist attraction, started with an impressive line of souvenir stalls and persuasive peddlers. Our 6th day in Yogyakarta, was dedicated entirely to doing 'the tourist thing'.

The first thing you notice about Kraton, the Sultan's Palace, is how massive it is, yet how the vibe of minimalism and not opulence runs through you. Sprawling far and wide and divided into 7 parts, never once are you overcome by the simplistic grandeur of the premises, yet surprisingly pleased with the calming effect of the whitewashed walls.

I must admit, my own preconception of Kraton was that it would be a fancy place, gilded walls with gold lavatories and whatnot, but I was more than satisfied when I saw the same down-to-earth-ness reflected in the palace grounds as in the people of the city.

Rini, our guide for the day, led us from the 1st part outside for coronations, to the 2nd part (which was where we met her) to the 3rd which is a waiting hall and where the gamelan (traditional Javanese music) is played every Sunday. The 4th part was still under reparation, as it had been badly damaged during the 2006 earthquake, so it was from the 5th till the 7th part in which we really understood the Kraton and its entirety. The first thing that greets you as you make your way into the Kraton is a pair of giant gupalas, monstrous looking statues which are said to be the guardians of the entrance. One statue represents all that is good, while the other represents all that is bad. The reason why both good and bad are represented is to display basic human nature, which includes both, the power of good and evil. Throughout the tour, we were informed about many deep symbolisms around the palace's elements. One that got everyone's attention was the intelligent way in which the Javanese year 1853 was 'written'. In Bangsal Manis, the dining area, one can find 2 red snakes with heads moving in opposite directions. Closer inspection (and a guide's help) will tell you that the swirls add up to the number 8, the crown atop the snakes represents the number 1, the face of Ravana represents the number 5 (because it is believed that every bad person has 5 characteristics, which include promiscuity, theft, alcoholism, and drugs)and the leech on the face number 3, all of which very conveniently adds up to 1853. 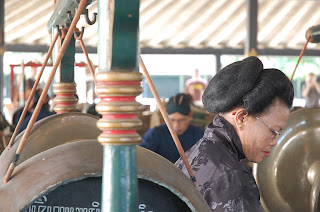 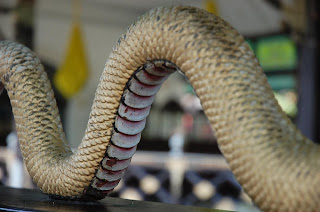 The snakes at Bangsal Manis, representing number 1
Yet another set of 'signs' was shown to us by our guide when she was leading us to the 6th part of the palace- the male and female residences. As per rule, as soon as the royal children reach the age of 17, they are separated into girls'(“keputrian”) and boys'(“kesatrian”) quarters, and what better way to show that than to use 2 dragons, one male the other female, both looking away but intertwined, to deliver this message? Ingenious I tell you.

Besides that, we all got a chance to look at various 'bangsals'- pavilions. Among them was Bangsal Kotak, where dancers wait in line before performing in front of the Sultan, another was Bangsal Mandolo Sono, where the Sultan listens to various types of music and most importantly, the Bangsal Pochono, where any type of important ceremony, from Muslim religious festivals to the receiving of official dignitaries, weddings and deaths are held.

Finally, we were led into a museum holding the previous Prince's, Sri Sultan Hamengku Buwono IX's vast memorabilia. There, we discovered, in our search of Yogyakarta, another interesting fact that set Yogyakarta apart from all other Indonesian cities.In 1945, the first President of Indonesia, President Sukarno passed a decree that allowed the reigning Sultan to simultaneously be the Governer. Many students also giggled at a cage-like playpen for young royals, while admiring intricate artwork on various sedan chairs made for the royals.

Our trip was filled with many bits of interesting information; for example, older abdi dalams (servants of the Sultan) who help out with the Dutch tourists, since most of them are quite fluent in Dutch. Another thing we were told was that there are distinguishing features in terms of the length of service to the Sultan where abdi dalams who have been working for 3 years or less are not allowed to wear a kris, a traditional weapon, though the senior members of staff are often seen wearing them tucked on the backs of their sarongs. Also, the current Sultan Hamengku Buwono X, has only one wife and no sons (only 5 daughters), a stark comparison to his father, Sultan Hamengkubuwono the IX, who had 5 wives. Still, that is not half as shocking as when we found out that Sultan Hamengku Buwono VIII, had 8 wives and 42 children through the genealogy showcased in the museum. 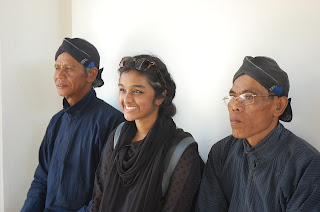 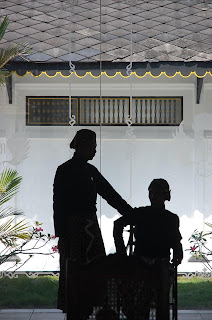 Being an Abdi Dalam is considered an honour
All in all, it was a fantastic lesson in Javanese culture, insight into the royal life behind the walls of Yogyakarta's palace and further evidence of the simplicity of the people of Yogyakarta. We were also intriguied that the ground one walks upon in the Palace is actually soil brought in from Mount Merapi, the active volcano in the Yogyakarta.


WRITER'S PROFILE: Abeer is pursuing Writing and International Studies at Monash University Sunway Campus. Being especially talkactive and chatty, Abeer is also part of the blog team that is in charge of this blog and In Search of Yogyakarta's facebook.
Posted by Monash