I woke up with a heavy burden on my chest. It was not only the fact that I was enduring a terrible cough (one that I acquired ever since the post-exams holiday) but also because I was waking up to our second to last day in Yogyakarta.

After getting ready, my phone rang, and as I peered to the screen of my phone I saw a message from an old high-school friend, who is studying at UGM. We decided to meet for lunch, and as she picked me up from Malioboro Mall, we exchanged stories over mie-ayam. It was ironic, yet somehow funny at the same time, to find out that throughout the 4 years she has been living in Yogyakarta as a student, she has never visited any tourist sites as we have in the past 8 days. In fact, her knowledge about the city, was limited to the UGM area and several shopping malls.

I do not wish to condescend or intimidate my friend, yet I have come to the understanding that if only I had rejected or pulled out from this trip, I would probably be like my friend. Being Indonesian, but the only knowledge of my country will be what is good to eat or where is good to chill. Living only under the confined, air-conditioned rooms in Jakarta, and not having my eyes open to what there was available for me outside of my little box. I have always lived under this generalized idea that cities outside of Jakarta are somewhat underdeveloped, they do not have the kind of shopping malls or developed districts as we do. Yet this visit to Yogyakarta was an eye-opener. I found out that the gems of this country are not the grand and boastful shopping malls that host a number of luxury brands or franchised chains. What allures people, especially people of different cultures and nationalities, to Indonesia is our culture and our scenery.

As I looked back to the past 8 days of our trip, I couldn't help but agree that however bad our hotel/motel rooms were, it was balanced by all the beauty we saw around us. From Mount Merapi, Borobudur, Prambanan, and even the paddy fields behind INSIST headquarters, I now understand what the commotion about Indonesia being a beautiful country is all about!! By looking at my other traveling mates, I sense that they see it too.

Yet this honeymoon period that we've experienced is coming to an end. We decided that our last night in Yogyakarta must be a memorable one. And yes, memorable it was.

We started the night with our farewell dinner at Bale Raos, a restaurant within the Kraton complex (rumoured to be owned by the Sultan's family members). As our honoured guests arrived, we all queued to get our food at the buffet area. White and Brown rice, sate-ayam, and a new favorite of mine, Timlo Soup (also the Sultan's favorite!), we digged in while chatting and mingling with our guests, which included Pak Roni from Rifka Annisa and Ariebowo. 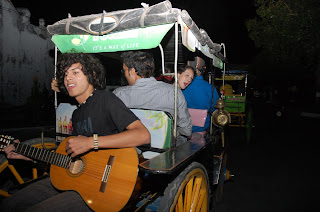 Arriving at Bale Raos with a parade of Andungs (Horse Carriages)
However, the night was not just for gulping down royal menus. Our student guides, Nana, Adi, Ike and Ambar, wowed us with a performance of them singing a medley of Indonesian traditional songs, including the classic oldie from Benyamin S, "Hujan Gerimis", in full Indonesian traditional costumes! Their friends Ika and Marsela also performed a traditional Javanese dance, the Saung Asmara. As a tradition (which started off two years ago), we also had to prepare a little performance to entertain and show our gratitude to our guides and guests. Our remixed rendition of Oasis' "Wonderwall" echoed the Kraton walls, as we sung,
"We've seen so much our bright new eyes are yearning,
For all we've done, we'll spread the word concerning,
There are many things that we would like to say to you but we don't know how.. 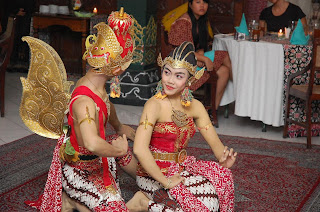 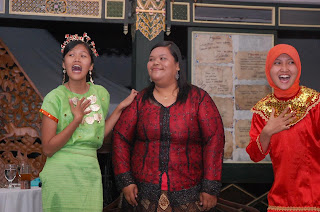 Performance by the Student guides 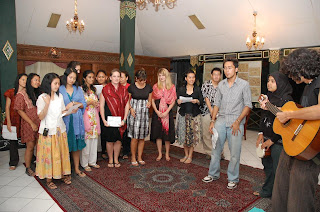 Our Performance at Bale Raos
The dinner ended in tears, as several of the girls hugged and exchanged email addresses. However, for the others, the night had only started.

Leading the pack, Dr. Yeoh, Shazwan and Rashaad lead the way to what was suppose to be the first option for our hotel near Jalan Sosrowijayan. After taking a peek, we embarked on a journey to the darker side of Yogyakarta- the red light district area of Jalan Pasar Kembang.

Jalan Pasar Kembang does not have the bright lights or the laid-back atmosphere as Amsterdam's red light district, De Wallen. As opposed to De Wallen, Pasar Kembang was a long but narrow alley, relatively dark in lighting, but bustling with people and loud dangdut music. There was rooms on each side of the lane, the walls painted green and empty with only a matress, and a girl as the decoration. As our large group walked quietly through the alley, we received calls and pokes from several of the bystanders, both men and women. 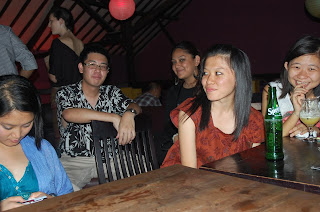 At Lucifer's at the end of Pasar Kembang
Throughout our trip, we have always seen the bright side of Yogyakarta- the green fields, the beautiful volcanic scenery, and the majestic pre-historic sites. For some of us it was hard to believe that there was a dark side to all of this, but for others, this is the real, uncensored Yogyakarta, the things we don't see in tourist brochures or advertisements. This is reality.

Talking about reality, it is time for us to get back to our reality. Our reality could be the new semester that starts on Monday, or the fact that graduation leads us to the world of job-searching...whatever it is, Yogyakarta has been a great detour from our reality.


WRITER'S PROFILE: Kemi is pursuing her last semester as a Communication major and International Studies minor. She is among one of the Indonesian students in this trip and is of Javanese descendant (as well as Bataknese, Sundanese and Bugis) which justifies her fondness for sweets. She is in charge of the management of the In Search of Yogyakarta blog as well as the resident tweeter.
Posted by Monash