"We need a holiday to recover from this 'holiday' " was the common phrase uttered by us Monash travellers, a few days after the In Search Of Yogyakarta expedition began. It seems just yesterday when we were at the LCCT, checking in and competing among each other to be the Winner of the Lightest Luggage Competition. The honour went to Miss Ultimate Light Traveler, Joanna Molloy with just 6kg of luggage, while Dr Yeoh was inagurated in the Heaviest Luggage Owner Hall of Shame with 20kg of luggage. To be fair, Dr Yeoh did have to bring along the camera equipment and appreciation souvenirs for our host organisations. 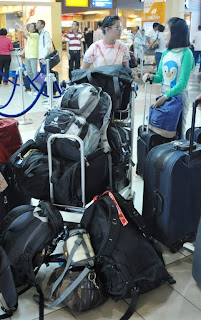 all the bulky luggage that the travelers brought 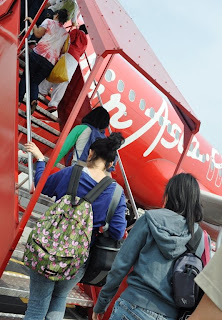 boarding airasia to yogyakarta
But here we are, the final day of the In Search of Yogyakarta Expedition. Nine days together in a strange hotel will inevitably create a bond among us travelers, a strange bond perhaps, which enables us all to chat about everything and nothing under the sun. A few days into the trip, it is no surprise to see groups of people previously unfamiliar to each other in each other's rooms laughing or moaning about the amount of walking done on that day, or to hear snippets of conversations among the Monash travelers in the bus ranging from the academically related 'I'm going to Italy next semester to study' to the completely irreverent 'I seriously need to take a dump right now...but our room toilet is too dodgy...'

Other than creating a bond among us Malaysians, Indonesians, Indian, mainland Chinese, Australians and Singaporean Monash students, this trip was invaluable due to the people and organisations we have met. The travelers unanimously agree that it would have been impossible for us to have the sessions with the various organisations such as INSIST and Taring Padi, without Dr Yeoh's wide range of networking. Personally, I found that the sessions deepened my understanding of the topics and theories I learn in the Monash classroom. In Monash University, we learn International Studies theories as merely theories, but in this trip we have met people who live out these theories in their daily lives. Our speaker at Pusat Studi Sosial Asia Tenggara is proudly socialist in leaning, while INSIST showed us the alternatives to the free market capitalist economy. These sessions enabled me to better understand the political theories I have learnt in my INT major, to see the political theories from the ground level.

For those whose majors involve journalism, or communications, this trip enabled them to practise the skills they have learnt in the classroom; the blog is a product of fine journalism, Taring Padi and the murals around Yogya shows the influence of the media and the
'text' in the political and social context of Yogyakarta, while the nightly video editing must have worked to enhance our video editing skills. Through all this, we also learn to meet deadlines, and that in the real world outside of Monash University our bosses would not accept excuses for missing deadlines. It was a 'deal with it' attitude when bumps appeared along the way to meeting deadlines. And we thought assignments were hard! But you can't keep a good student/alumni/guide/tourist down, and we finished all the required work.

Yogyakarta is a very musical and open city, where buskers roam the streets making music and alternative expression is openly aired through street murals and posters found along Malioboro street. We were fortunate enough to have this trip just as the Indonesian election results were announced. The political posters promoting political parties were rampant on the streets, but what was more surprising was the open presence of posters critiquing Indonesian politics or other social issues or posters reminding the politicians that Indonesians deserve more than just lip service. This method of holding the government accountable to their promises and keeping the government on their toes through these posters, is I'm sure good for the Indonesian people and democracy. Perhaps Malaysia could learn a thing or two from Yogya where the artists at Taring Padi had shown us, one does not have to wait to be old or have a political science degree to take an interest in national politics and subsequently try to change the negative aspects of local politics.

Nonetheless, the trip was not all work. While it was eye opening to have the sessions with the various organisations, we also had a lot of fun and light hearted moments when we did the touristy thing like visiting the Kraton,Borobudur,and Prambanan, watching the graceful Ramayana Ballet or playing with the children of HUMANA who steamrollers us in basketball. As summed up by Paulista, we students 'realised that we were growing old' when we were all begging for a time out after the basketball session while the kids and Dr Yeoh were still raring for another go. 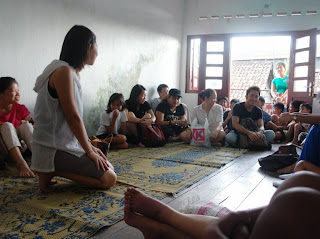 Marina moderating for the HUMANA session
So this is the closing diary entry after 9 days. After the fantastic farewell dinner yesterday, the performance by both the Monash travelers and the student guides brought tears to some of our eyes at the thought of parting, What have we found In Search of Yogyakarta? We found a vibrant place, where alternative expression was the norm. We found helpful, gentle student guides, always obliging but having their own spark of mischief in teasing us. We found out how fortunate we all were, with our water heaters and air conditioning while the people of Kali Code relied on the river and weather. Now we find it is time to say goodbye. 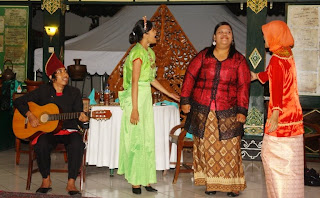 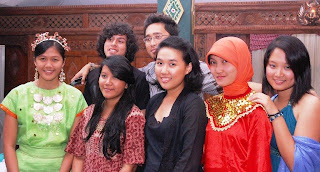 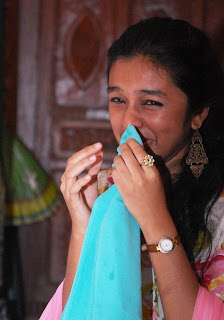 Until we meet again, hei hei!


WRITER'S PROFILE: Marina is a final year student at Monash University Malaysia, doing a double in the Bachelor of Arts in Writing and International Studies. Marina is from Malacca and was particularly impressed by INSIST which opened her eyes to the alternatives to capitalist free market. She finds INSIST fascinating as it is a real-life example of the theories she has learnt in her International Studies unit.
Posted by Monash