Many Tastes of Yogyakarta

The cultural capital of Indonesia, Yogyakarta is truly a heaven for anyone in search of gastronomic delight. The city entices you with many resturants and warungs or lesehans to choose from. However, I am specifically interested in the countless warungs or lesehans I found along the Malioboro street where the choice of delicacies range from main course to dessert; all of which are sold along the kaki lima or sidewalks. Here in Yogyakarta, the real eating experience is equated to duduk lesehan (sitting on a mat) in the dusty street side, munching on tasty local foods and listening to the occasional entertainment from the pengamen (street musician). What an experience! Especially when each on the menu will not cost you more than Rp 20,000 or USD 2 per plate. 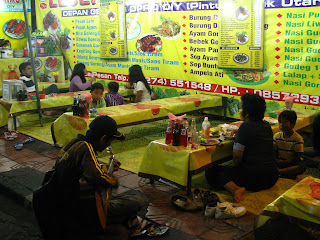 One of the many lesehans in Malioboro
To us Indonesians, there is a saying shared among us that “Orang Jawa bermulut manis” or 'Javanese people have the sweetest everything'. The saying has come from how the Javanese cook their dishes, which involves a lot of sugar and is thus renowned for their sweetness. However, being a multi ethnic island itself, Javanese dishes should be divided into about four major groups which are the Sundanese, Maduranese, East Java dishes, and Central Java dishes.

East Java dishes generally use more chili and less sugar, while Central Java dishes are sweeter and use less chili.

Yogyakarta dishes are known for their sweetness. Its most popular traditional dish, one that you can find almost anywhere in the city is Gudeg. Gudeg is variety of dishes including chicken, jackfruit, hardboiled egg stew, tofu, and tempe cooked in the mixture of coconut sauce, kluwek (traditional herb), and teak leaves (which gives the brown color into it), known as Areh. It tastes uniquely sweet and slightly spicy. The meal will not be complete without its staple complement- warm rice and sambal krecek which is bull's inner skin deep fried and cooked with chilli giving it a spicy taste. 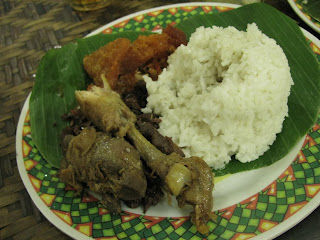 Gudeg Kering (Dry Gudeg)
I took the above picture of Gudeg at one of the many food stalls in the famous Gudeg station, Jalan Wijilan. After a talk with the locals, I found out that there are actually two kind of Gudeg in Yogyakarta. What we had in Jalan Wijilan is apparently what considered as Gudeg Kering (dry gudeg)- the coconut milk and the herb is cooked in less water. While the other Gudeg type is Gudeg Basah (watery gudeg). My curious palette was finally led me to this lady in Malioboro street side who sells the watery Gudeg type. 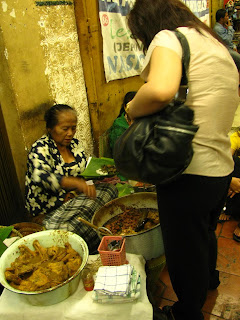 The distinctive feature between these two types of Gudeg would be its watery Areh. I prefer the watery Gudeg as I love having that much Areh with my warm rice But both undeniably tastes awesome and it just leaves me wanting for more so I am very sure that I definitely will have more Gudeg again as soon as possible before the trip is over.

We shall move on to another dishes called Wedang Ronde. It is a warn ginger drink with peanuts, kolang-kaling (made from palm tree and coloured pink), shredded bread, and ronde (sticky rice with peanuts filling). According to my fellow travellers, Wedang Ronde smells beautiful and indeed it does. The taste and the smell of Wedang Ronde is best experienced during the night when the temperature is lower, as it gives you extra warmth feeling as you swallow. You can purchase this ‘warmth’ for only Rp 3000, or less than USD 50 cents 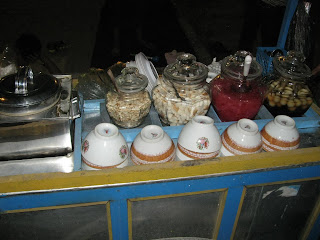 Still in search of some local taste I found this famous local food which usually come in boxes as people love to bring it back for souvenirs, it called Bakpia Pathok. It is made from thin dough pastry with green bean paste inside. Bakpia Pathok would be a perfect bite size snack when served with hot coffee or hot tea anytime, or even just for munching it by itself. In case you are wondering, Pathok is the name of the place where Bakpia first gain its prominence among Yogyakarta people and even the tourists. Cater to many different tastes, many Bakpia producers nowadays do experiment with using other fillings, ranging from chocolate paste, cheese, to even durian. Generally, a box of this sweetness will cost you around Rp 15,000 or USD 1.50. 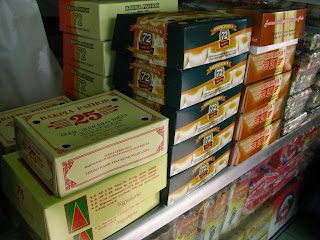 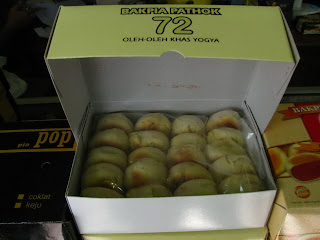 In this article I picked what I personally considered the best of the best food in Yogyakarta here. So, you might want to try those and many other dishes for yourself when you visit Yogyakarta sometimes. Happy eating!

WRITER'S PROFILE: Paulista is pursuing her final year in Bachelor of Arts. She transferred from Monash College, Jakarta last year and is among one of the Indonesian students in this trip. Although having been raised in Jakarta, Paulista has been exposed to the cultures of other regions of Indonesia, and admits that she would rather pick spicy or salty foods over sweet ones.
Posted by Monash