At the break of dawn on day 7, it was a sure thing to find everyone still covered in their blankets embracing every last bit of their dreams from the night before. On day 7 we knew that there were no early sessions in the morning to wake up for and everyone just slept in except the travelers who had stories due in the morning at 10.00 a.m. Everyone had been reminded the night before that the whole afternoon was free for those who had to pursue their still unwritten stories due in the following days. Hence, in the morning all the travelers were scattered doing their own things; Joanna who had a soft story to write on Batik headed off with our student guide Ike and a few other fellow travellers who were personally interested in Batik to Kampung Kauman, where they were scheduled to learn the art of Batik from Batik master Lukman Jamali. While they were off to their Batik session, the other students were once again out on the streets bargaining their hearts out to buy souvenirs for their folks back home. Occasionally the shoppers would convene and compare prices of the goods bought, to get the best deals. 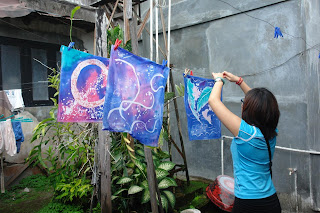 The results of the Batik session at Kauman
By 2.00pm everyone began heading back to the hotel from wherever they were to meet up with Dr.Yeoh at the lobby before heading off together for the final session in this trip; meeting the children of HUMANA, a kind of day care centre for underprivileged children. However on the way to HUMANA we lost our way and was rescued by Mbak Adis a representative from the shelter. Despite getting lost, we still arrived 15 minutes before the scheduled time of 3pm and thus had plenty of time convening in the HUMANA house and getting to know the adorable kids before heading off to a schoolyard nearby to play some pre-planned games. After lots of translations and miscommunication with the children we managed to play 3 games which were 'wolf and sheep', 'ular dan naga' and also basketball. Everyone including the travelers played along, laughing and running together with the children. A few injuries occurred to the travelers- Shazwan was accidentally hit in the face and I had my foot stomped on. Painful, but I am sure that for both Shazwan and I, these injuries only made the day more memorable, as sometimes memories are made from injuries. At the end of the session we took the compulsory sedate group photograph and Dr Yeoh's favourite 'jumping shot'. We also distributed the candies, toys and books that were brought for the children in the centre. We then slowly walked back to the hotel feeling really exhausted and old. 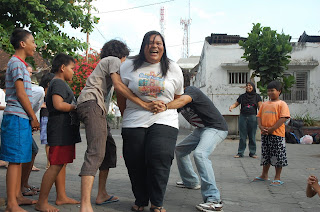 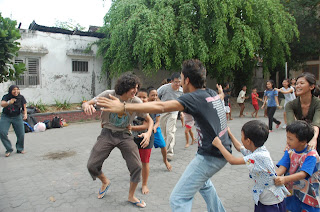 The children laughing and playing with the students
When we arrived, we gathered at the lobby for tomorrow's briefing and right after the briefing everyone was once again free to do their own activities; some headed off for dinner, some to the cyber cafe writing up their blog entries while the rest went shopping.Melanie and i went for a wonderful massage and spa at a hotel near by with Farhanah as our escort. I must say that today was one of the most laidback day on the entire trip to Yogyakarta.


WRITER'S PROFILE: Feeza is currently a third year student (hopefully graduating in 2 days time) majoring in International Studies and minoring in Communication. She is an absolute crazy one. Laughing is her middle name and she is always in love with children. One of the most veteran travelers in the IN SEARCH series organized by Dr.Yeoh and Monash University Sunway Campus, Feeza is also a person with a very complex heart and mind. She hides her feelings a lot (seriously) but adores her family and friends to bits. =)
Posted by Monash