He gets up before the sun even rises. Proceeding to an alleyway, he stares at a wall covered with filth and old propaganda posters. Taking out his brush, he begins his work. Hours later on that same wall, a colorful and uplifting piece of art brightens up the formerly dark and filthy alley. This is the product of a mural artist who spends time painting Yogyakarta, wall by wall, contributing to making the city the colorful place it is is today.

The many street murals that can be seen all over the city are works that require blood, sweat and tears of mural artists in Yogyakarta. Seeing their completed works of art in broad daylight after spending a night or many nights working on it is extremely rewarding for these artists.

In this study trip, I've had the privilege to meet and interview Pak Bambang, one of the many artists who draw murals which give Yogyakarta its colour. Pak Bambang currently works as a lecturer in ISI (Institute Seni Indonesia / The art Institute of Indonesia). He was also part of the now closed, Apotik Comics, a company which was active in mural painting and comic publishing. The style of the many murals he has painted are heavily influenced by his time at Apotik Comics as he structures some of his murals in a comic format. The tools that are mainly used to make these murals are wall paint, roof paint, brushes, long sticks and bamboo scaffolds.

Pak Bambang explained the process of how these murals are made. First, he needs to plan what he wants to draw before actually painting at the site. Secondly, he asks for permission from the people around the area he has chosen by showing them what he wants to paint in their area. He then cleans the chosen wall and begins sketching the outline of his work. Later, he paints the walls with the corresponding colours. This process may take several days and require a lot help from other people before the product is finally completed.

Drawing inspiration from his life experiences and current events from the television and newspapers, he draws art that acts as a parody and critique towards local events and issues. He explains that some of his murals required him to paint large structures like bridges. In such projects the use of bamboo scaffolds is necessary to reach places as high as 8 meters to paint the murals. 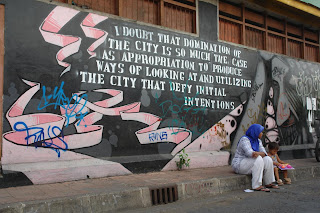 Street Murals that acts as a critique to social issues His opinion on other artists who also create murals around the city is that their works may bestow the city with striking colours, but these works tend to lack meaningful messages. Pak Bambang strongly feels that murals should have an uplifting theme that relates to the people living in the particular neighborhood where it is drawn. For example, in the lead-up to 17 August th of August each year, during Indonesia's Independence Day, many artists will usually draw murals with colours that match the occasion, but Pak Bambang feels that these murals are nothing but superficial decoration which lack a meaningful message.

There are times when Pak Bambang's murals are painted over by other artists. He feels sad and disappointed when he sees his artwork, a product of hardwork by him and his friends painted over by another mural or worse, defaced by graffiti.

Pak bambang is just one of the many artists active in drawing murals and producing other artworks. His colourful and meaningful works have given life in the city of Yogyakarta that would have otherwise been at best plain and at worst ugly and dirty. Meaningful or not, these various colourful murals in tight corners, wall, shops gutters, bridges and underpasses have given Yogyakarta a unique characteristic. 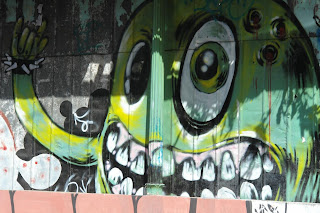 Murals can be found all over the city 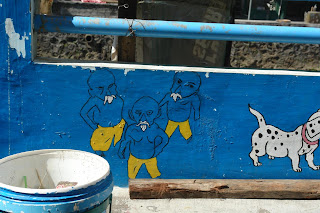 WRITER'S PROFILE: Jinn Wei is a Writing & Communication major from Malaysia. Intrigued when he read books and saw videos of the various street murals in Yogyakarta, Jinn Wei wondered whether there was a deeper meaning behind those murals other than being colourful and fancily designed. The fact that these murals which would have been labelled 'graffiti' in other places served the positive purpose of creating a colourful street atmosphere unique in Yogyakarta drew him to investigate more about them.
Posted by Monash