A Preview of the Local Dangdut Scene

Crass, cheap-looking, big fake smiles in glittzy shreads of material was my first, somewhat unsympathetic and judgmental opinion of what I saw in front of me when I'd been taken to Indonesia's local dance scene. Dangdut performances were, to me, a clothed version of stripping...and singing.

Of course, there's a lot more to it than that but I challenge anyone to think otherwise when they're first confronted with one, two or maybe three buxom women up on stage clutching at microphones with painted talons wearing wigs and dressed in strips of sequins and polyester frills squawking at a crowd of men who have long forgotten about their (other) female counterparts. It was quite a show. We had managed to arrive 15 minutes before the end, and perhaps that was enough for me. 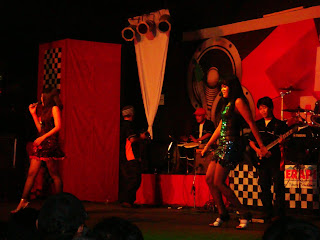 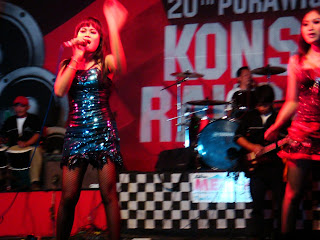 Dangdut stars are known for their glitzy (and often crass) performances 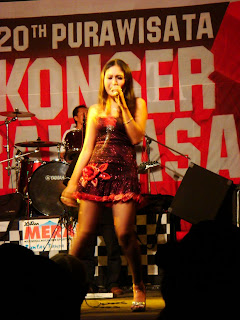 dangdut is also known as 'musik rakyat' or the music of the masses
The final act was a duo of 20-something year olds dressed in yellow, and these girls were by far the most daring. There was mutual caressing, girating and hip-grinding action thrown in with complex and athletic posing involving spread-eagles and external props. Need I say more? You get the idea.

Dangdut was started in the 70's by the self-proclaimed “King of Dangdut” Rhoma Irama, among working class Muslim youth, but beginning in the late 1990s reached a broader audience following in Indonesia and Malaysia. These days the girls still perform for predominantly blue-collared workers and cross-dressers in need of a few thrills. The theory is that they dance to a heavy, low drumming sound. I could hear a lot more over the drums, I admit, but where my criticisms lay with the style of singing and dancing, they could not extend to the charming performers I had the privilege to meet afterwards, on the insistence of the friendly club owner. As it turns out, these girls are named Anna and Novi and they are both studying law.

The pair, called “Double Ratu Star” (Double Queen Star), both love what they do because it's stress-free and the pay is good. The club owner states that these two are excellent at what they do, which is explains why they are a popular choice amongst the dance venues which hold Dangdut performances. And as they stare out at me under impossibly long eyelashes I wonder whether or not they really want to do this, or whether it's an easy way to pay for their courses. Anna explains through my translators that her mother encouraged her, as it was a family generational tradition. She goes on to say, with the enthusiastic input of her partner, that they don't even need to practice that much because it comes off so naturally! And the law? Is the more self-sustainable option for when the stardom of being one of the best Dangdut dancers eventually wears thin. 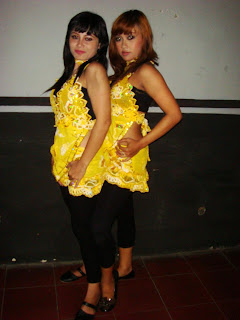 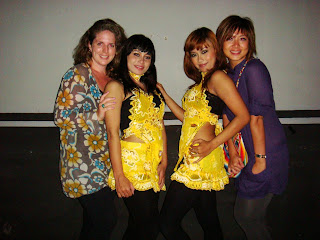 with the two dangdut stars
I thank them so much for their time, especially as I hadn't expected an interview from the Queens themselves. They were all too happy to help.

So as we walk out of venue, which had cleared within minutes of the show's conclusion, my more local friends explain to me their own experiences of Dangdut, and what they understood it to mean. Adi, one of our Pathfinder leaders, explains that a show he had seen in a rural area was a little more "wild" and had even, at times, involved the gratuitous use of raw meat. Mmmm. Rachel, one of the Malaysian students from Monash, understood the Malaysian style of Dangdut dancing to be more 'traditional' and more modest in its costumes.

Well, regardless of what is was, or what it was perceived to be through my ever-widening eyes, I couldn't deny the show's popularity nor the energy and enthusiasm maintained by all the girls. But perhaps I'll stick to the more mainstream venues for my own dancing enjoyment.


WRITER'S PROFILE: Dominique or Dom as we all call her, has a mixture of English, Irish and Austro-Hungarian heritage. The Virgo who is pursuing a double major in French and Photography and minoring in Communication hails from Melbourne, Australia. Dom recalls poco-poco or line-dancing in Purawisata and walking blindfolded through the Banyan trees in Alun-alun Selatan as her favorite moments in Yogyakarta.
Posted by Monash