Borobudur: Sharing A Way of Life

Imagine riding on a plane high up above the Central Java Province, only to find a 'mandala' (an ancient Sanskrit word for 'healing circle') amidst the greeneries. Similar to every other world heritage icons, the Borobudur Temple is one of those enigmas that exemplify the wonders of mankind and faith. The Temple portrays Buddhism as a way of life through the tales of resisting temptation and desire as we pursue our journey into enlightenment.

On our excursion day, we took the opportunity to visit one of the 7 wonders in the world. However, it was surprising that the weekend had attracted more of the local visitors than the expected foreigners. As we made our way into the 'international visitors/VIP' entrance, the street vendors trailed behind us to sell us their products. One can't help but be lured to the sunglasses, hats and umbrella offerings due to the blazing hot sun.

After flashing our Monash student IDs to receive a special rate of 7.00USD (rather than 12.00 USD), we finished our welcome drink and got acquainted with our tour guide, Aishah. As we walked through the park she began her introduction to the history behind the Temple's existence. Every now and then the patient lady had to pause and wait for us as we got engrossed within the surroundings. You can only imagine our reaction when we spotted the sight of the Temple from a distance. It was truly one of those moments where you just stop breathing for those few seconds and wished you had more than those silly cameras to capture the moment. 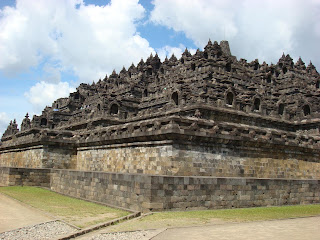 Borobudur from the side
The view of Buddha statues and holed 'stupa' (dome shaped monuments) were accompanied by nature's mountainous backgrounds. We were told that we had to walk up the 3 sections of the Temple in a clockwise manner. As we climbed up the first level known as "Kamadhatu", Aishah explained the deeper meanings of the ancient scriptures. We quickly realized how those images would have meant nothing if it weren't for her explanations. She was telling us how Buddhism describe human lives as a struggle to control desires. One of the images portrayed alcohol and opium as a form of desire that disrupts the journey into spirituality. 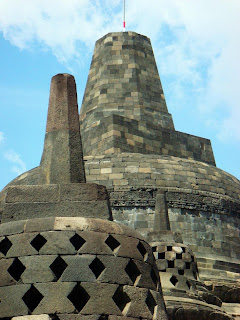 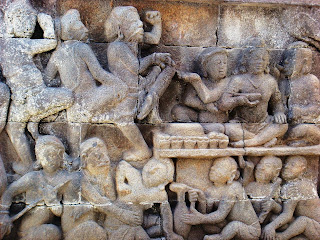 stories and philosophies carved into the stone
Some of us listened intently while the rest were evidently distracted by taking photographs and videos. We climbed our way onto the large steps into the second level, called "Rupadhatu", which apparently described the life of Siddartha Gautama. Lastly, we made our way into the highest point known as "Arupadhatu", which lies the view of the largest stupa. We were told that in order to receive blessings, the men would touch the fingers of the Buddha, while the women would touch his feet. Regardless of how unrealistic those stories may sound, most of us who seemed like wishful thinkers silently made our wishes as we struggled our hands through the stupa holes to touch the Buddha.

Despite the serenity that we embraced from the magical place, we had to fight our way for space amidst the heavy crowd. As we duck our heads away from the colourful umbrellas, we managed to catch the glimpses of beauty that we sought for. Perhaps what broke the tranquility was when the young locals began to approach some of us for photograph sessions.

“Can I take photo for you?” said a young Javanese girl. I responded by saying, “Sure, I can take a photo FOR you”. She reacted in disagreement and resorted to hand gestures which explained how she wanted to take a photograph WITH ME. And so I reluctantly did. It eventually became hilarious to take several photos with them and yet not understanding the reason behind their request. 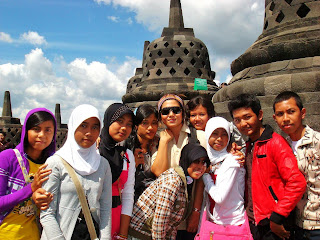 With random Javanese students
At the peak of the Temple, Aishah told us that we should begin circling the 'Arupadhatu' area in a clock wise manner. Apparently, it is an ancient Buddhist practice of truth whereby one is to circle the stupa with our vows made in hearts. After we made our rounds, Rashaad and I sat quietly on the edge, staring away to the mountains as though we had reached a higher level state of mind.

Visiting the Borobudur Temple on a weekend is probably a different vibe altogether given that it was overpopulated. I reckon that a weekday visit would have enhanced the placid environment especially when there's no need to battle for a comfortable spot. Nevertheless, it doesn't change the fact that we have now experienced a globally accepted form of sacredness. It was simply up to our imagination to shut out all the unnecessary noise as well as erase the extra images of the rest of the world, only to have a solitary moment of discovery.


WRITER'S PROFILE: Rachel Lai is a Malaysian currently pursuing her FINAL year in Bachelor of Arts (majoring in International Studies and Communications) in Monash University Malaysia. A passionate day-dreamer addicted to exploration, she believes that there is nothing in this world that should stop us from fulfilling our dreams.
Posted by Monash