Exploring the Royal Dimension- The Spatial Allocation within Kraton, the Sultan's Palace of Yogyakarta

Found in the heart of Daerah Istimewa Yogyakarta (DIY) is the palace housing the Yogyakarta sultanate. It is designed with intricate thought and planning that begun in 1755 by Prince Mangkubumi who was also known as Sultan Hamengku Buwono I. Kraton Ngayogyakarta Hadiningrat, the official name of the Sultan's palace becomes a central point from where the rest of the city crawls out strategically in all directions from this royal residence. The grand display of Javanese architecture is enthralling and proved to have been crafted with careful allocation of different areas of the territory dedicated to different purposes. However, given the extensive compound covering approximately 14 000 metres square, it would be impossible to elaborate on every aspect of this structure.

Every section within the Kraton has its own name accompanied with significant meanings which convey crucial Javanese principles like the Sangkan Paraning Dumadi, the historical past and existential future of the human being. The palace stretches from north to south, both cornered with a front yard known as Alun-Alun Utara and a back yard known as Alun-Alun Selatan respectively. What is most unique about the design of this historical site is that it has been purposefully constructed so that the palace, the Tugu monument, an obelisk 2 kilometres north of the palace, and Mount Merapi is situated in a single file. It is believed that such a decision was deliberately made as this strategic position is essential for its spiritual status, bringing good luck and prosperity to the area. 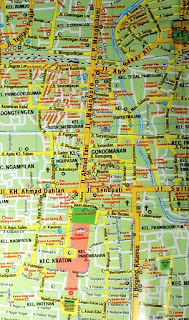 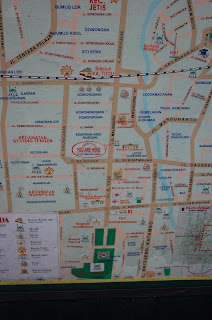 Keraton is located in the middle of Alun-alun Utara, Alun-Alun Selatan, and Mount Merapi
Nestled on the west side on the north square of the Sultan palace is the Grand Mosque or what is locally known as Masjid Agung. The traditional outlook of the mosque is clearly illustrated via its special roof known as the “tajug”, a characteristic feature used specifically for the construction of an Islamic structure. This is where the weekly Friday prayers, religious ceremonies and activities popular amongst the Javanese Muslim population like 'Sekaten' (an annual event to commemorate the birth of Prophet Mohammad) and 'Grebeg' (an event held during the first of Muharram, to commemorate the Islamic new year) are held at.

The Purworetno, is the main area of the palace, an area that the Sultan frequently visits to perform his duties, made especially more relevant now as the current Sultan Hamengku Buwono X, is the elected governor of DIY. Beside the Purworetno, visitors are introduced to a two-storey building known as the Panti Sumbaga which houses the Sultan's private collection of texts from various eras. The Sultan takes his seat in the Manguntur Tangkil Hall within the area of Siti Hinggil which rests itself on a higher ground as compared to those surrounding it. The elevation of this particular area has been done in line with his status within the society, a figure well-respected by the rest of the community. 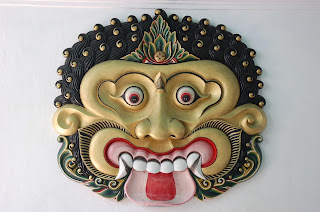 The Rahwana - one of the many symbols within the Kraton
A most unique feature within the vast space of this building is the section of the palace known as Regol Gapura. Not only do the various structures installed house great symbolic significance, the fine architecture of the building even takes pride in the type of plantation which exists within this compound. A number of 'waringin' (banyan) trees are grown to symbolize the human body, 'Asem' (sour) trees, grown mostly in the southern section, connote youthfulness and the 'pakel' (a type of mango) tree signifies the puberty stage. Such is the intricacy in the planning of this historical building as extra effort is put in, in order to ensure that the authentic Javanese architecture is showcased on the exterior walls complemented by the palace's interior composition. 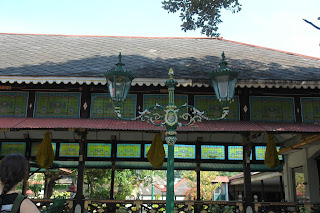 Javanese architecture is heavily influenced by Hindu and Chinese culture 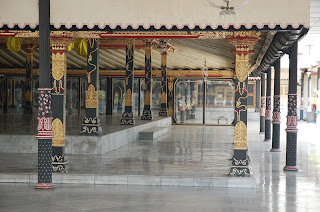 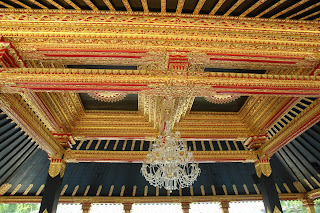 The exquisite design of the Kraton's ceiling
Kraton has been generally accepted by the Javanese community to be a physical symbol with the Sultan as its soul. Despite being an extremely old structure that has been damaged and restored, the philosophy behind its intricate architectural plan is still preserved. Replete with philosophical and symbolical connotations held firmly by the Javanese people, the Kraton is a manifestation of the forces of nature led by the enchanting structures put in place.


WRITER'S PROFILE: Farhanah Bagharib aka Nana is currently doing her Honours in Monash University Malaysia. She graduated the previous year with a degree in Bachelor of Communcations. Nana is a citizen of Singapore with immediate ancestry from Yemen in the state of Hadramawt. Being extremely interested in the workings of the feminist theory, Nana's Honours thesis revolves around the concept of feminism in Iranian cinema. Nana is SUPER picky with food but as long as there's fast food, she's all good.
Posted by Monash