Background Information: HUMANA is one of the NGOs in Yogyakarta which has been helping and supporting street boys, between the age of nine and eighteen. It was established in 1982, with the informal name, Girli. The organization could also be described as a cooperation between street children, the employees of HUMANA and volunteers who are working together seeking alternative possibilities for the life of the street children.

Since 2002, HUMANA started to focus on street children from the kampungs (villages). The main focus of HUMANA’s activities is prevention. Today, HUMANA has 5 bases in 5 different kampungs (villages). In this project, HUMANA chose education and health care accessibility as their main concerns. The reason is that education and health care are basic needs that marginalized children do not have.

On the 15th of July, our group of Monash travellers visited the HUMANA branch located at Yogyakarta's Malioboro Street. Earlier on, those who did not bring gifts from Malaysia went to the nearby mall to purchase some small gifts for the children of HUMANA-sweets,biscuits and a basketball. At 4pm the group arrived at the HUMANA centre, to see the smilling (albeit nervous) faces of the children and teenagers greeting them. As the HUMANA children were rather shy, a short introduction session was held as an ice breaker. The children were then told to pick a Monash traveller and they led to a nearby schoolyard for the games session. 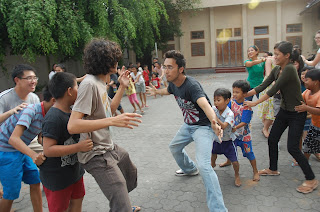 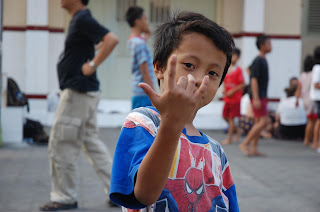 After the ice-breaking session, the children were especially playful and cheeky
During the intervals between the games we played, the Monash students chatted with the HUMANA children and discovered that most of the children were not orphans. Due to poverty and parents who are forced to work long hours, the children are sent to HUMANA during the day to play and study in a safe environment. Mr Presta, one of the facilitators at the centre works as the middle man between the underprivileged families of the neighbourhood and HUMANA. Being familiar with most residents in the neighbourhood, it is easier for him to act as the point of communication to approach the parents of the children he sees left unattended during the day to join the HUMANA centre. His role is also to help the underprivileged children in their homework and healthcare, but he is not meant to take over the role as a parent to these children. The children see him more as a friend than a parent. 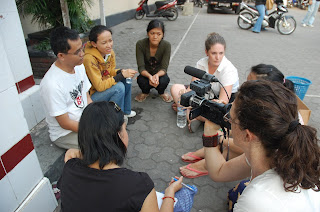 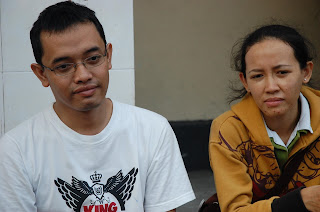 Mr. Presta and colleague
HUMANA has a wide range of networks including links to the Swiss Embassy which provides a mobile clinic health care service for children who have no access to health care services. HUMANA also hands out scholarships to children until they are 18 years of age. Funds for HUMANA comes mainly from public donations.

When asked if he had any regrets working for HUMANA, Mr Presta smiled and said "this is what I chose. I want to have a full time job taking care of these children. I have a happy family, I just want everyone else to have one too". 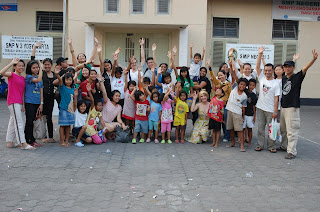 
WRITER'S PROFILE: Wei Jia Xi or Cici, is studying Bachelor of Arts majoring in Communication. Coming from Chongqing, China, Cici loves to eat spicy food and has a particular interest in film and video recording. She is part of the video team, where she has learned new things, and feels thankful for having the opportunity to participate in this trip
Posted by Monash