For those of you frequenting our blog, I have the pleasure of informing you that the header for In Search of Yogyakarta 2009 is from one of the places we visited today. Phew! What a day. A lot of the pathfinders here may remember today as the one with the walking. That, we did.

Admittedly, I started off the day in a pretty low mood. It has come to that point of the trip where you're tired physically and mentally but you haven't quite pushed through it yet (I suspect that will come tomorrow). After my exhilarating horse ride on the beach at sunset yesterday, I woke to aching muscles, ligaments and (I'm pretty sure) bones as well. My camera has decided to die mysteriously (helpful, since I'm in charge of photography) and my favourite yellow scarf which had been a popular accessory to many of yesterday's beach photos had gone missing. Yes, the day started out gloomy despite the hot sun. The one solace was that we were allowed to sleep in, and I didn’t even do that!

So, today was all about getting out of our comfort zones and learning about other people's daily ways-of-life. This involved a short walk to the house and studio of a young man Ariebowo who lives with his parents in the Kauman neighbourhood. Besides being architecturally unique with the houses in the neighbourhood being mostly old houses built several generations ago, the Kauman village is also unique in the sense that it is a very close knit community; extended families generally live in houses nearby each other. 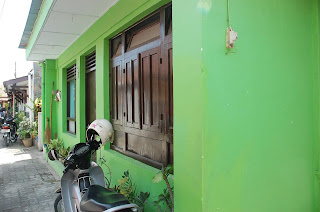 Colorfully painted houses in Kauman
Walking along the Kauman neighbourhood, we saw painted shutters, stone houses, pet birds greeting us with their sing-song whistle as well as large, warm smiles from the community locals. When we entered Ariebowo’s father’s studio, we sat in the front room of the house which was used to greet guests while the the inner section of the house was reserved for family. Ariebowo then explained about his father, Lukman's, batik painting work and how it is very well received in Europe particularly Germany where he predominantly sells. I discover that this is where a few of us students will return on Wednesday to try our hand at batik painting with Lukman, the master himself. Ariebowo explained how his mother wakes up early every morning, sometimes at 1am, to prepare local kues which are bought by the vendors who collect them from Ariebowo’s mother and 6am before being resold on the street by vendors. We were lucky enough that Dr Yeoh ordered a box of the delicacies for each of us. Each box contained 3 kues, one of which I liken to a quiche, a vegetable filled doughnut and a soft flat bun. Yum, yum, yum. Especially delicious to those who hadn’t had their breakfast yet.

We learned about the importance of this community to its residents. It's a Muslim sector, lived in by many members of an extended family (Ariebowo's auntie's house faces his and his grandparents live nearby) and it is rare for the house to be sold if one of the extended family decide to live elsewhere for a while. They usually rent it out or allow other family members to live in it, eventually returning because it is ultimately where they want to spend the twilight of their years in due to the familiarity and slow paced environment. 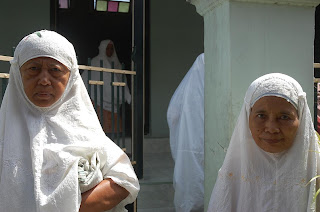 Kauman residents who have just finished their afternoon prayers
As we walked around, some of us stopping-off to pray and some to buy fruit and chat with the locals, it was pretty obvious just how happy people there are. In those tiny streets there is a policy against motorbikes so the safety and tranquility is preserved, and there seemed to be a lot of thought and dedication put in to the lay-out and maintenance of residences.

We eventually made a move, saying thank-you and goodbye loaded with new boxes of kuihs we purchased for the next community we were visiting- the river based community of Kali Code ( pronounced as cho-day). 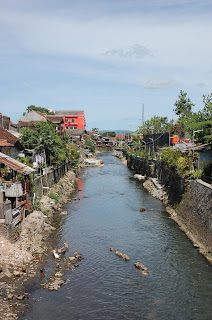 View of Kali Code from a bridge
We spent a long couple of hours winding along the esplanade - an elevated walkway between residencies and the water - and past the brightly coloured, leafy front doors of the river locals. Kids would whoosh past us, sure-footed and full of sprite, to poke their tongues and pose for photos. I even saw spray-painted chicks (the poultry kind) in green, purple and orange. Mothers with babies would encourage them to wave to us, and gangs of teens would smirk and mutter jokes for the rest to enjoy. 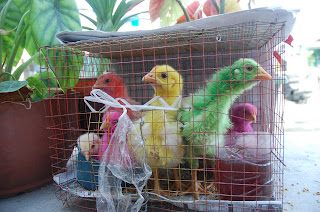 Believe it or not- Colorful chicks!
Down below in the river men fished with bamboo traps and fed their noisy brace of ducks. Sadly, the people living by the river also used it as a dumping ground for rubbish and a site for defecation; I was glad to be walking up stream. Standing on a bridge across the river, I realised that this was where Dr Yeoh took the blog header photo from. So this is where the blog header-photo is from. As you could see from the photos on the blog, the walk was very scenic. 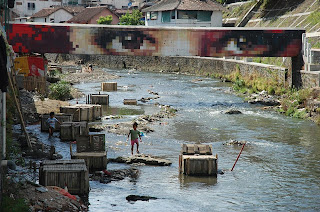 Kali Code
Once we reach our destination (an hour late) we are greeted by the community leader, Darsam, in the community hall. My first impressions were that the layout of the area was similar to that of European places based on steep embankments - full of steps and a mish-mash of levels for houses and walkways. Darsam explained his role as leader of the community in bringing the currently improved way of life to the peoples. He said it was an easy job to look after the community because the residents are dedicated to following his advice.

Walking around the whole day really helped me gain insight into Yogya and its people. I had been invited in to private spaces made by and lived in by people whose lives are so different from my own. I had been diverted from my sour attitude and engrossed in a lot that I saw. Now I'm lazing in the cyber cafe, absolutely wrecked but happy to have an appetite because of the exercise. I don't have a functioning camera, but there's a chance I'll get my scarf back and my aching body is healing. Thank you to the people who made today special and who made a grumpy foreigner smile again.


WRITER'S PROFILE: Dominique or Dom as we all call her, has a mixture of English, Irish and Austro-Hungarian heritage. The Virgo who is pursuing a double major in French and Photography and minoring in Communication hails from Melbourne, Australia. Dom recalls poco-poco or line-dancing in Purawisata and walking blindfolded through the Banyan trees in Alun-alun Selatan as her favorite moments in Yogyakarta.
Posted by Monash