Yogyakarta Nightlife: Back on The Streets Again

No bags. Little cash. Laces tight and purposely under dressed to be more inconspicuous. We thought we were ready for another dive into the Red Light District of Yogyakarta, in search of a good story and prepared for the worst-case scenario.

Shazwan and I set off into the vibrancy of Jalan Malioboro, weakened by the late hour with less people roaming the streets. A short walk-up to the Circle K mini-mart brought us to our first detour, Jalan Sosrowijayan. As we turned into the street, the warmth that generally perpetuates throughout the city dissipated into the night sky, despite the area being a hub for tourists and backpackers. Trying not to stand out or let our anxiety manifest itself, we turned right into an
alleyway that was narrower, darker and more foreboding than those we had previously traversed. We were nearing our destination as people faded away into the shadows. Our next turning appeared suddenly next to us, nondescript and barely noticeable. Signs of life. A steel gate, blocking our path, blocking us from entering the district that was slightly visible from our vantage point.

Undeterred, we searched for an alternative route by joining the main road known as Jalan Pasar Kembang. Having been there previously the night before, the darker streets and the few people caused morals and ethics to become vague and grey. Prostitutes lingered in the darkness of side streets, overseen by their pimps and blocking our entrance into the main area. Others walked the streets quietly as becak (trishaw) drivers slept in their vehicles. Every sound, murmur or clamor rang hostile as the night devoured the streets, sending our adrenaline pumping.

After many unsuccessful attempts to enter the alleyways we turned left along a street; the pathway to Hell at the end of which stood Lucifer's Bar. As we made our way closer, we saw a familiar shady character who tried to entice us to an unknown location for an open purpose the previous night. Thinking that running into him again would be a bad idea, we avoided the bar and made our way back home, not without frustration and disappointment. 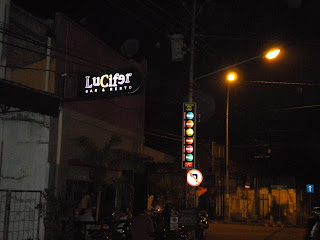 Lucifer's Bar at the ungodly hour
Jalan Malioboro was empty. After a brief reprieve at the nearby internet cafe, we made our way towards our familiar alley. "Do you want Indonesia girls?", a man whispered to Shazwan who was sitting near the entrance to the alley of Hotel Puspo Nugroho, the hotel we were currently staying at. Brushing him off, we could not help but wonder that ironically, despite us going to the local Red Light District we were approached at our very doorstep. 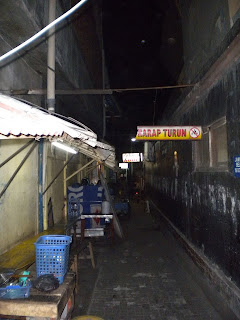 The alleyway to our Hotel
The streets transform at night. The sheer absence of people and omnipresent silence distort perceptions of safety and helps to open doors previously unseen. We continued to pry in search of something, anything that would satiate our curiosity for the night. A warning splashed on a door, a turn down a dark alley and walking along a road previously unexplored got us lost in a foreign city at 1am in the morning. More walking in the night breeze along desolate streets until
we eventually managed to find our way back home again.

Trudging along the stairs back up to our room, physically tired but incredibly awake, we slumped to semi-defeat in a battle against the night. Is there another way in? Should we go with a local, with another friend? Unanswered questions swirled in our heads, wondering whether we would ever be able to see the real Yogyakarta before we left, whether our experience would be confined to the boundaries of tourists. Maybe another night, tomorrow night. One last venture into the unknown before we leave this country, one last attempt to see the darker side of the city.


WRITER'S PROFILE: Rashaad is from Malaysia and loves exploring strange places at odd hours, looking for different, eccentric things to do. According to Rashaad, roaming around Yogyakarta at night helps to bring out the inner socialist while the isolation leaves room to think.
Posted by Monash